The Catholic Parsh Records of Ireland

In 1949, Dr Edward MacLysaght, Chief Herald of Ireland and Keeper of Manuscripts at the National Library of Ireland, approached the Bishop of Limerick offering the NLI's services to help in the permanent preservation of the genealogical information contained within the Catholic Church's collection of parish registers. The NLI's offer to microfilm parochial registers was taken up by every member of the Hierarchy. Although civil registration of births, marriages and deaths began in 1864, records were not accurately kept for a number of years, so a cut-off date of 1880 was applied for the microfilming of registers.

The usual procedure followed in relation to the microfilming was to send a senior member of NLI staff to a diocese to collect the registers, bring them to the NLI in Kildare Street for filming, and then return the registers to the diocese. The filming of registers diocese by diocese began in the 1950s and was completed over a period of 20 years. Additional filming of registers from a small number of Dublin parishes took place during the late 1990s. As a result of this work, the NLI holds microfilm copies of over 3500 registers from 1086 parishes in Ireland and Northern Ireland. The start dates of the registers vary from the 1740/50s in some city parishes in Dublin, Cork, Galway, Waterford and Limerick, to the 1780/90s in counties such as Kildare, Wexford, Waterford and Kilkenny. Registers for parishes along the western seaboard do not generally begin until the 1850/60s.

Church registers of marriage and baptism are considered to be the single most important source for family history researchers prior to the 1901 census. In many cases, the registers contain the only surviving record of particular individuals and families. It is a testament to the role and work of the Catholic Church in Ireland that so many registers were created and maintained during some of the most turbulent times in Irish history.

With growing numbers of people engaged in family history research and limited on-site facilities at the NLI in Dublin, the decision was taken in 2010 to digitise the parish register microfilms. Following a tender process, the contract for digitisation was awarded to AEL Data who converted 550 microfilm reels, containing over 3500 registers into approximately 373,000 digital images. These images correspond to a page or two-page opening within a register volume.

In October 2014 the NLI Board formally approved the making available of the microfilm images online on a dedicated free-to-access website. The individual registers have been reassembled virtually and made available to users via a topographical database. The development of the parish register website has been carried out by a small team in the NLI's Digital Library section. New Graphic created the visual identity for the site. Special thanks should go to John Grenham whose assistance throughout the project was invaluable.

The digitisation of the Catholic parish register microfilms is the NLI’s most ambitious digitisation project to date. It demonstrates the NLI's commitment to enhancing accessibility through making our collections available online.

Until recently, one of the most frustrating aspects of researching my family's history was the lack of access to the Irish parish registers.  While visiting Ireland in 1988 I visited the small town Clogheen where the Sullivan family originated.  While there I visited St Mary Church to see the place where my grandfather Christopher was baptized and also with hopes of seeing the parish register of births with his name in the hand writing of the parish priest that performed the sacrament.  My efforts were unsuccessful and in retrospect I realize that I was imposing on the parish priest who had undoubtedly received the request by countless others before me.  Returning there again in 2006 I discovered that all the baptismal copies were available for research at The  Waterford and Dungarvan Library.  Even though I was just a few short miles from the library, I was near the end of my stay there and time would not permit any serious enquires.  It would be almost ten years before I would have the privilege of  researching the records online thanks to the efforts of the National Library of Ireland who in the same manner as I, felt that these historical documents must be preserved and freely available to all those who wish to access them.

For help in translating Latin and Irish names to English names:  ireland.net

The Sullivan Family from Clogheen Tipperary

There is a predominant belief in our family that all roads lead back to Ireland and that is for the most part true.  As stated previously, the first family members to move here from Clogheen in Tipperary  County married mostly within the confines of their parish of St Mary.  On mother’s side of the family in County Tyrone, the background is a little more diverse including members from surrounding counties as well as Scotland.

The great migrations of immigrants to New England between 1840 and 1900 coincided with the industrialization of the textile mills and ancillary endeavors and was a consistent draw for both the skilled and unskilled poorer classes mostly from western Europe.  Often overlooked however, were the large numbers of immigrants from the French speaking province of Quebec who also came to seek a better life.  Two French Canadian family names are associated with the Sullivan clan from Clogheen are Houde and Boutilette and this story will document both families and their move to New England. This is about our family’s French Connection.

The Houde (pronounced Hood) family connection takes place in Quincy Massachusetts at St John the Baptiste Church on September 2, 1912.  William John Sullivan, the eldest child of Charles Sullivan and Margaret Mulcahy marries Alexina Anna Houde, the daughter of Edward Houde and Tarsyle Lheuxeux.  The Houde family is large but not untypical of French Canadian families that pour into New England beginning in the 1850’s having  flows and ebbs until the influx comes to a halt around 1930. 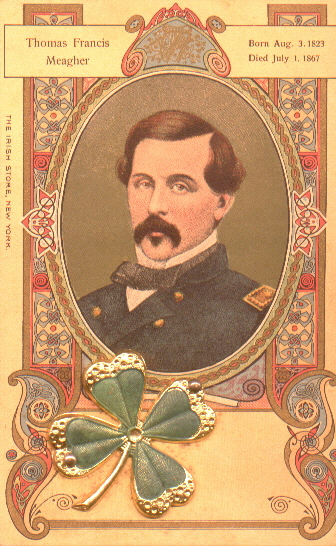 Brigadier General Thomas Meagher was born in Waterford city Ireland in 1823, the son of Thomas Meagher a prominent city Merchant who traded between Waterford and Newfoundland, Canada Thomas Francis became disillusioned, at a very young age of constitutional politics and joined the Young Ireland Movement. He was sent as a delegate to French revolutionaries in Paris but came back with no money or arms but he brought a flag modelled on the French Tricolour comprising three vertical bands Green, symbolising the south, Orange the North and White for peace between the two warring factions. The new flag was first flown in 1848 from the Wolfe Tones club in Waterford and later at the GPO in Dublin during the Easter rising in 1916. It then became the flag of the Irish Republic. He was later convicted of sedition. While initially sentenced to death, he was eventually exiled for life to Van Diemen’s land, now Tasmania. He would later escape to America, where in New York at the outset of the Civil War he helped form, and would later lead, the IRISH BRIGADE in the Union Army.

Meagher arrived in New York City in May 1852.He studied Law and Journalism and became a noted lecturer. He eventually founded a weekly newspaper called the Irish News and decided to take United States citizenship. Meagher joined up with fellow young Irelander John Mitchel who had also escaped from captivity, published the radical pro-Irish, anti-British, Citizen paper. At the outbreak of the civil war Meagher struggled with his conscience and his decision to fight for the union was not an easy one. On his lecture tours he had travelled all over the South, establishing close friendships and he sympathised with their desire for freedom. He was however vehemently opposed to slavery Meagher on choosing to fight for the Union said “It is not only our duty to America, but also to Ireland. We could not hope to succeed in our effort to make Ireland a Republic without the moral and material support of the liberty-loving citizens of the United States ."  Meagher implored the Irish in the North to rally to the flag and defend the Union. He advertised in local newspapers to form a company in the New State Militia. One advert stated “one hundred young Irishmen, healthy, intelligent, and active, wanted at once to form a Company under the command of Thomas Francis Meagher”  Company K of the 69th regiment of the Irish Brigade was soon established

On April 29th 1861, the regiment was added to Brigadier General Irvin McDowell’s Army of North -eastern Virginia, and fought at the First Battle of Bull Run. Despite a Union defeat, the 69th fought bravely. The Brigades commander Michael Corcoran was captured, and Meagher succeeded him as colonel. On the 3rd February 1862 Thomas Meagher was commissioned as Brigadier General to lead the Irish Brigade in the coming peninsula, campaign. In late May, during the battle of Fair Oaks, Meagher saw his first action as a Brigadier General. The union was defeated at Fair Oaks, but the Irish Brigade developed a reputation as fierce fighters. The Irish Brigade turned the tide at the Battle of Gaines Mill on June 27th joining the fighting after a forced march through the Chickahominy River, as relief for weakening Union Forces. This engagement is considered the highlight of Meagher’s military career.

On September 17th 1862 the Irish Brigade suffered devastating losses at the Battle of Antietam. Meagher led an attack against a position later referred to as “Bloody Lane” and lost 540 men to heavy fire before being ordered to withdraw. During the battle Meagher was injured when he fell off his horse. More terrible losses came at the battle of Fredericksburg. Meagher led 1200 men into battle and it was reported “Two hundred and eighty men only appeared under arms to represent the Irish Brigade”.  The war had shattered the Irish Brigade; it was 4,000 strong in May 1862. But by late May 1863, it had only a few hundred combat-ready men left. After the Army refused his request to return to New York to recruit enforcements, Meagher resigned his commission on May 14th 1863. This was rescinded by the Army in December of that year after the death of his successor Brigadier General Michael Corcoran, who had been released from Confederate captivity. Meagher was assigned to war duties in the west and he later commanded the District of Etowah in the department of the Cumberland from November29th to January 5th 1865.

Meagher resigned from the U.S. Army on May 15th 1865. After the war Meagher was appointed Secretary of the new territory of Montana, later becoming acting Governor. In the summer of 1867, on the way to Fort Benton, the Missouri River terminus for steamboat travel Meagher fell ill and stopped to recuperate. Sometime in the early evening of 1st July 1867 Meagher fell overboard from the steamboat G.A. Thompson into the Missouri river, His body was never recovered.

"Your soldier's heart almost stood still as he watched those sons of Erin fearlessly rush to their death.  The brilliant assult on Marye's Heights of their Irish Brigade was beyond description.  Why, my darling, we forgot they were fighting us and cheer after cheer at there fearlessness went up all along our lines." - General George Pickett